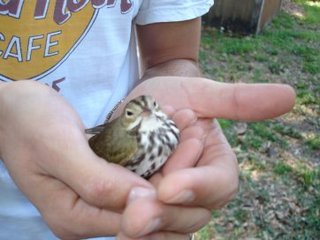 Resting in the Hands of God - Article by Claire Krulikowski

(The following article excerpt is written by Claire Krulikowski and reprinted with permission from the April 1998 issue of the New Times, Seattle, WA.)

"There is a state of comfort — a state of grace — that's almost imperceptible, and most difficult to describe. It begins quietly. It begins when it is. It is when we settle our self, peacefully and comfortably — vulnerably — into the outstretched palm of God: there is God and there is self, and not a single thing in between. It begins when we are there every moment, if only for a moment.

"It is a state, a sense, a feeling that many seek and only some have experienced. Once experienced, we need to know it again, and, like diplomat Robert Conway in the 1937 movie Lost Horizons, who escapes well-meaning friends to thrash through raging Himalayan snow blizzards, we seek return to our peaceful moment within Shangri-La. Those who've not actually experienced it yet seek it, albeit unconsciously, because all paths ultimately lead to that same place.

"There are days, though, I'd opt for the stormy Himalayas! Having nibbled it, how frustrating sometimes to replay that gifted moment when God seemingly dangled such a blessed lure within us so that we might reel our selves in; only, trying so hard, we circle around it until the landscape and our memory blurs. We may panic, fearing ourselves irreparably lost.

"Yet it's also those remembered moments that soften our psyche, that whisper to us amidst some confusion, felt some other day, "Try that other path...over there," or hushes some habitual confrontation/response, or inspires us to visit an orphanage.

Thunk
"My backyard is my retreat and something of a habitat. Undulating cedar and hemlock limbs inspire me to know God everywhere the wind may blow. The grove where I meditate is one favored by gnomes. The energies are strong, and the ground fairly percolates some days. A hawk is as likely to settle ten feet from the deck as more typical backyard birds. For years, animals have been offered food and water here, and offer delight, beauty, and song in turn.

"One spring day, birds began dying: not just one day or one bird, but several days, several times a day. I didn't just walk the property and discover a tiny carcass. Instead, birds slammed into my sliding glass door with a heavy thunk.

"Thinking a tree limb had fallen, I ran out. I discovered instead a distinctively marked, chubby robin I'd watched building a nest for days lying motionless. Yellow goop oozed from her dead eyes.

"I wailed like a mother who'd just lost her child. My tears dampened the robin's feathers as I stroked her wing, describing how her beauty had brought such joy to the world and myself. Then I offered a prayer for her care and free flight on her passage.

"The next couple of days, the sound and meaning of thunk turned my stomach as more came: sparrow, chickadee, nuthatch, jays, an endangered band-tail pigeon. I adjusted the screen door to cover the area they seemed to be running into, only to watch a finch, moments later, zip toward it, alter course, and bounce off the glass. They ignored the warning waves of several flapping windsocks.

"Why? Why God? Why is this happening?" This wasn't normal. I wondered if these birds might be reflecting something about me, but felt no barriers curtailing my own flight. "What can I do?"

"Not all died instantly. These I'd cup hands over as I'd observed my healer friends do. I offered them healing energies, love, and, seconds later, mouthed a prayer as the so-innocent creature passed from this life.

"I wondered if I was meant to heal these birds, but then each death seemed my fault, and I feared if I didn't get my act together this kamikaze spree would never end!

"I pulled out all the stops for a badly wounded Steller's jay, calling on God, St. Francis, angels, Zarathustra, the Grandfathers, St. Jude, Krishna, the deva of Steller's jays, ad infinitum, to help heal this bird. He stayed in the warmth of my home, but by next dawn the jay was dead.

"A thunk later that afternoon signaled the drama's continuance.

Trust
"A chickadee lay on its side, one shattered legged hanging useless. My presence panicked the bird to propel himself forward using his good leg in attempted escape, while, pitifully, his head rolled around and around like a spinning ball lolling on its neck.

"Frantic that he'd fall off the deck's edge, I dove over the bird and enclosed my arms around it. "Stop, little one," I entreated gently, as some mighty internal force hushed my panic over this one's extreme injuries. What was wrong with this little one?

"We're gonna make you better, honey," I cooed to the chickadee. "God," I entreated to the robin's-egg-blue sky, "please heal this sweet thing." Compassion overcame my despair as I whispered to this bird, and its agitation quieted.

"Then, it was just the bird and me, and no other thought, only something odd, like waves beneath my skin. Feeling like a part of him, I began singing a song I can't remember now, entreated God to "care for one of the least of your creatures," and held my palms over the chickadee, allowing healing energies to flow.

"In that moment, my heart so full, faith in something greater seemed to be born or invoked, until I whispered, "In the name of the Father and of Jesus Christ and of the Holy Spirit of God, you are healed."

"I peeked. The bird still lay propped on its belly, but, amazed, I noted that the head no longer rolled. "What about the leg?" my mind screamed, and I bent over to examine it.

"It hung limp — only, in the next moment, watching it in a slow motion frame-by-frame film, I saw the leg, bit by bit, reconstruct, and the bird rose to stand.

"I stopped breathing. The bird, meanwhile, just sat and waited.

"I nudged the bird to urge some movement. That fluff ball stepped onto my hand, clenching the very strong toes of its now two perfectly normal feet around my finger. He stayed there for a very, very long time, while I cried heaves of released emotion/disbelief/gratitude/wonder/astonishment to the God who'd so miraculously answered my prayer.

"The miracle didn't end there. Could this bird fly? Prying his fingers from me, all he'd do was sit on the deck. Was he in shock? Suffering a concussion? I stepped twenty yards behind him, offering him free flight. A minute later, how astonishing to see this wild little bird lift off, then fly back around to me, as though I were its mother. Shaking, I scooped him up from where he'd landed in front of me, and we sat together.

"Have you ever held a wild bird in your hand? I don't mean in that uncomfortable finger lock that's meant to keep them from fidgeting; I mean, have you ever sat on the grass with a bird, not even as long as your index finger, sitting smack dab in the middle of your palm? Just sitting. Present. Trusting. Completely vulnerable. Sitting.

"Such a time: many suspended moments of delight, awe, wonder, rapture, total focus; nothing around me seemed like anything I'd ever known. Then, all at once, a force, as loving as a thunderous wall of wave is mighty, crashed into every cell of me! In that moment, I experienced the overpowering double sensory understanding of what it would be like if I'd offer myself just so purely, lovingly, and trustingly into the hands of God. I also knew the total delight and love God experiences when someone trusts completely to rest in God's hands.

"When I asked for understanding, God helped me accept how already sick or injured birds would have been drawn to one with a frequency similar to theirs "to receive their healing — or not," knowing that I'd honor even their passing in some way as, indeed, I had through my prayers.

"I grew gentler that day, yet there would be more moments..."

- (Excerpt by Claire Krulikowski; Copyright©1998; Reprinted from the April 1998 issue of the New Times).